Chanel has constantly been one of the top luxury designers, and a bag from the French brand has actually been considered as an investment. Throughout the years, the Chanel Classic Flap and Reissue 2.55 bags have increased its prices due to various factors, such as inflation, demand, prices of raw materials and labor costs. The Medium 2.55 Flap bag was the first design to be released back in 1955. During that time, it was priced at $220.00 (USD). If you calculate the inflation, the value of $220 in 1955 is almost $2,000 this 2017.
Fast forward to 1990, the same bag was made available again in boutiques at $1,150.00 (USD). Since then, the demand for the bag, including the Classic Flap, have increased, as well as its prices. By 2005, price has gone up and has been having an increase every year from 2008 to 2012. The last increase happened in 2014.
For Europe Price Increase Summary, click here.
Here is a price increase summary of the Medium 2.55 Flap, which also has the same price as the Medium Classic Flap. 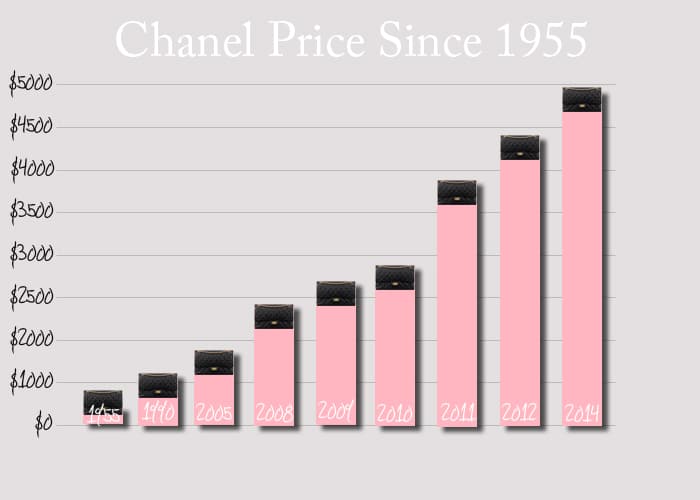 For the Boy Bags, last increase also happened in 2014. The first increase took effect in May 2014, along with the Classic Flap and Reissue 2.55 Bags. By October 2014, when the brand released their Cruise 2015 Collection, prices for the Boy have gone up again.